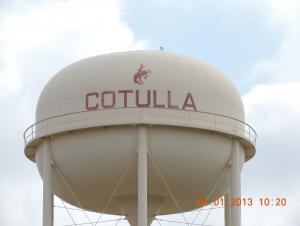 Cotulla is a city in and the county seat of La Salle County, Texas.

History of Cotulla, TX:    A Polish immigrant named Joseph Cotulla arrived in La Salle County in 1868. When the International-Great Northern Railroad decided to lay tracks in La Salle County, Mr. Cotulla began work to create the town of Cotulla. In 1881, Mr. Cotulla donated 120 acres of his land to the railroad, and in 1882 a depot was built. In 1883, the town was given a post office.

On June 28, 2013, the Texas Historical Commission, the United States Department of the Interior, and the National Register of Historic Places designated downtown Cotulla as a significant part of Texas history with the unveiling of a historic marker.